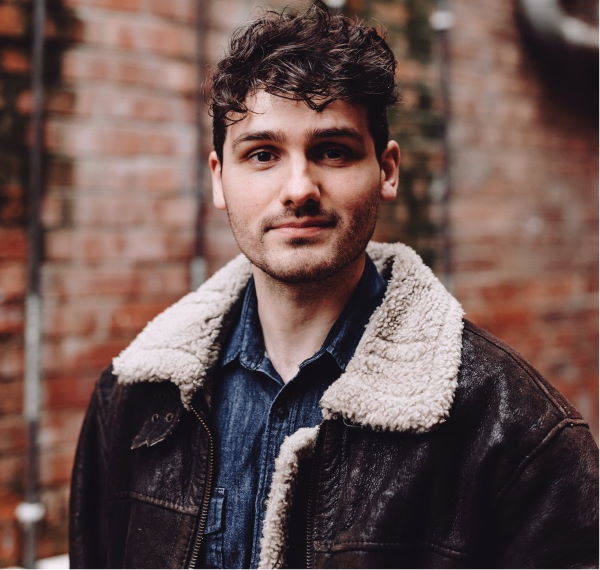 Dom Prag is a folk singer originally from Southampton. After gigging around Brighton in his formative years in such venues as The White Rabbit, The Fiddler’s Elbow, The Brunswick and Marwood Cafe, where he launched his EP Talitha and Other Songs in 2015, he has been taking folk clubs by storm all over the UK. Since 2017 he has ranged across seventeen counties and London. He has appeared at Birmingham BE festival (2013), Nozstock (2014), Folk East as part of The Knights Project, in 2016, and more recently, Wickham  Festival, Wimborne,  Purbeck Valley, Wessex, Bridport and South Downs Folk Festivals. During lockdown in summer 2020 Dom moved onto a narrowboat, which he christened, ‘The Bonny Moorhen’, after one of his favourite folk songs.

His own songs start as poems and then undergo a transition into songs as the music is composed. Throughout 2016 and 2017 he worked on the Ferry Tales project on the Isle of Wight where he collaborated with poet Robyn Bolam and fellow musician JC Grimshaw, setting poems to music. The work was showcased in spring and summer 2017. Dom Prag unveiled his debut album, Young Man on a Ferry, in December 2018. During 2020 he began recording his second album, Needle and Thread which was released in November 2021. During a long stretch of lockdown where he was moored in Banbury, he got involved in a local social history project led by Banbury Canal CIC director, Kate Saffin: ‘Memories of Bygone Banbury’. The project recorded interviews and stories told by residents of Banbury, about the canals, the industries, and the people. These stories are now being made into podcasts, with Dom’s music weaving in and out of the dialogue. https://www.domprag.com/