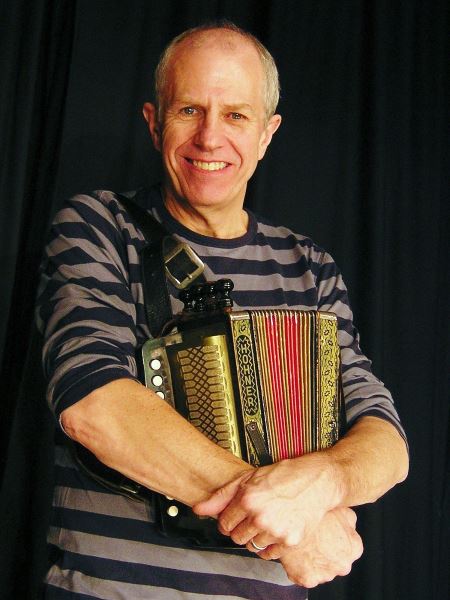 A very welcome and popular return to our Club. John Kirkpatrick is the complete folk artist, and an example to everyone who hears him. He is a supreme musician, a wonderful singer.

John Kirkpatrick was born in Chiswick, West London in 1947. A deep love of music was instilled from birth, and family gatherings always included a hearty sing-song. School choirs, the Church choir, playing recorder and piano ensues, until he joined the Hammersmith Morris Men, in their second week, in 1959.

Whilst with the team he took up the melodeon, then the button accordion, then the anglo concertina, and got hooked on the traditional songs that were accompanied with a post-dancing pint.

John has gone on to become one of the most prolific figures on the English folk scene, performing solo, in duos, acoustic groups and electric bands, and has established an enviable reputation as an instrumental virtuoso and session musician, as well as a leading interpreter of English folk music. He has been a member of the Albion Country Band, Magic Lantern, The Richard Thompson Band, Umps and Dumps, Steeleye Span, Brass Monkey, Trans-Europe Diatonique, and Band of Hope, as well as numerous ceilidh bands.

He rejoined The Albion Band for The National Theatre productions of “Lark Rise” and “Candleford”, and from 1980 has regularly worked on shows at The Victoria Theatre (later The New Victoria Theatre) in North Staffordshire, The Orchard Theatre Touring Company based in Devon, and elsewhere. As songwriter, composer, choreographer, and musical director, he has contributed to over sixty plays in the theatre and on radio. And as featured artiste, band member, or session player, his music can be heard on over 200 different commercial recordings.