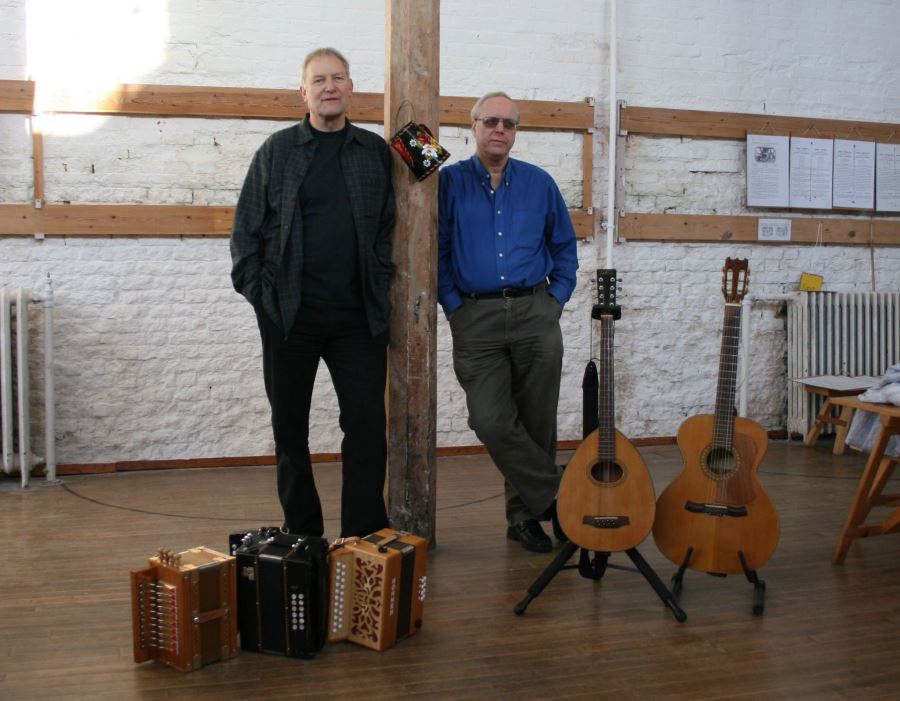 Life and Times are Graeme Meek and Barry Goodman. Graeme’s traditional idiom songs form the mainstay of a Life & Times performance. One of his songs has been performed by John Kirkpatrick and another has been recorded by Carolyn Robson. A third has been used in a film submitted to the Cannes Film Festival and a fourth was used by BBC Schools Radio’s Singing Together. Other songs have been used as publicity for a Shropshire theatre company and as part of a Berkshire Education history package and his music has become part of several living traditions. He is a contact for BBC Radio 2’s Sold on Song songwriting clubs. A member of E-Ceilidh band Time Of Your Life. Former presenter of BBC Radio Bedfordshire’s 3 Counties’ Folk (1985-1991).

With over 30 years in folk behind him, Barry Goodman he has been described as a Folk Polymath. Besides Life & Times he calls and plays for the E-Ceilidh band Time of Your Life. Has also called with other bands including Random, Grand Union, Mawkin, Stomp, Fendragon, The Woodpecker Band, Moondance, Triality and Laughing Gravy. Has called at Sidmouth, Towersey, Wimborne and Rhythms of the World Festivals. Has danced with Ampthill’s Redbornstoke Morris since 1977 and has been a musician for The Outside Capering Crew, Rockhopper Morris and Bedfordshire Lace. For many years he has been MC and caller for The Hertfordshire Folk Association’s annual Summer Dance Festival for children at Hatfield House. Serves on the Festival’s organising committee and also runs Folk Dance Workshops for teachers and children. Is involved in the New Roots young musicians’ competition. Has been an MC at Sidmouth, Towersey, Chippenham, Cheltenham and Shepley Festivals. Performs his tune ‘Four Up’ on the CD Grandson of Morris On. He is a contact for BBC Radio 2’s Sold on Song songwriting clubs.