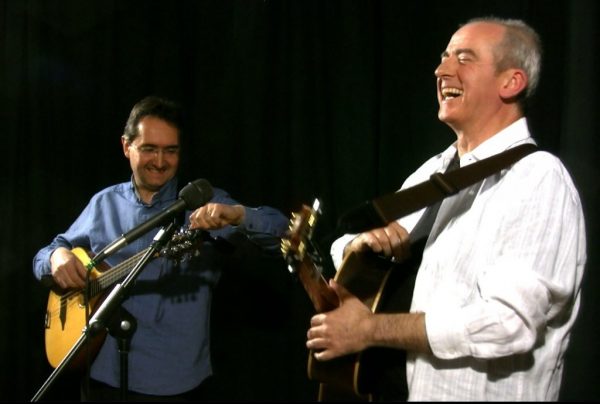 A welcome and popular return to our club for this extremely talented Duo.

‘Herts-based duo Na-Mara are described by Folk London as “elegant and skilled musicians”. They perform in venues and festivals across the UK and have in recent times performed in France, Germany and Spain and featured in broadcasts on BBC Radio 4 and a host of local radio stations. Their music includes self-penned songs in traditional style on contemporary and historical topics; traditional songs from the British Isles; their own translations of songs from the Breton, French and Quebecois traditions, and tunes from Brittany, France and the Spanish Celtic regions of Asturias and Galicia.

….Navajos & Pirates is “a stunning album..combining English French and Spanish traditions and exquisite songwriting..by one of the outstanding duos on the English folk scene.” Folk World

“ … Na-Mara turn an austere sound into elegant one with their voices displaying the required authority for such subjects. …”Spiralearth

“that’s what Na-Mara do best: tell stories to which you can’t but listen…” Rock & Reel Magazine

In recent years, Na-Mara have built an enviable reputation for fine story-telling and musicianship , performing in venues and festivals across the UK, at events in France, Spain and Germany and on BBC Radio 4 and a plethora of internet and local radio stations. They consistently deliver new and exciting material to folk audiences with their own provocative material in traditional style on contemporary and historical topics; their English translations of songs from Breton, French and Quebecois traditions; and their take on traditional tunes from Brittany, France and the Spanish Celtic regions of Asturias and Galicia.