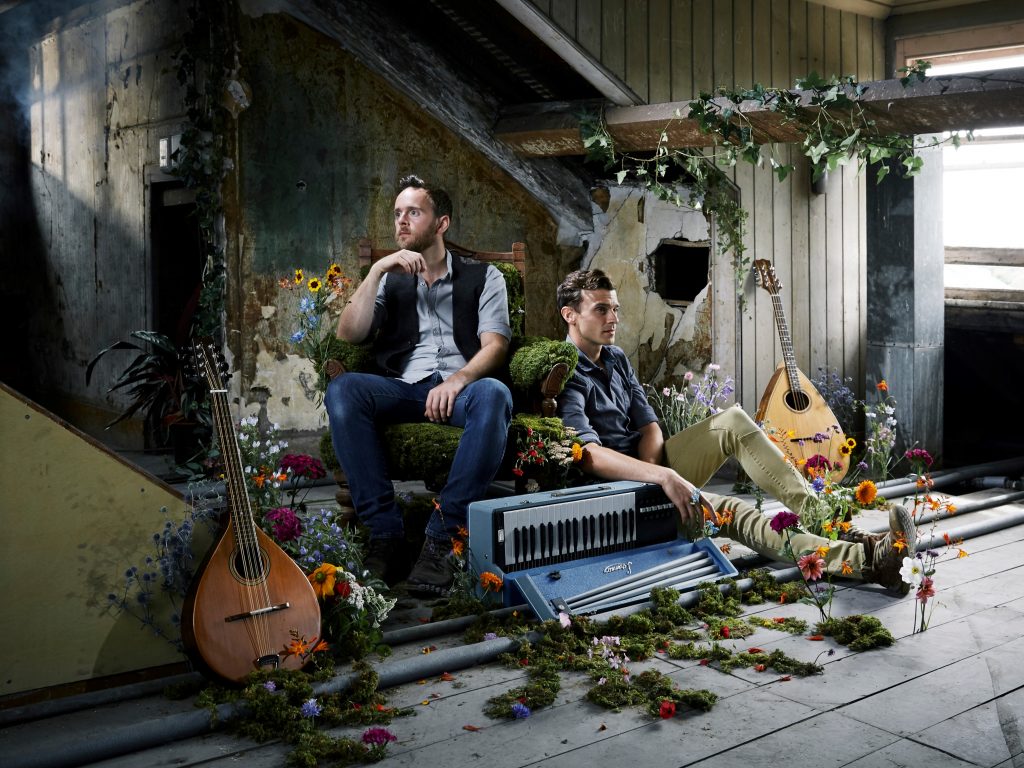 Another example of how strong British folk music is at the moment.’ ★★★★ The Telegraph.

Ninebarrow are a multi-award-winning folk duo, who are impressing audiences across the country with their innovative and captivating take on the folk tradition. Described by Mark Radcliffe as sounding ‘like two halves of one voice’ and by Mercury Music Prize nominee Kate Rusby as ‘absolutely amazing’, Jon Whitley and Jay LaBouchardiere combine breath taking vocal harmonies and melodies, delivering original songs that are inspired and rooted in the landscape and history of the British Isles. As well as crafting unique and engaging original material, Ninebarrow also take a wide-range of traditional folk songs and rework them in their own, distinctive way.

In 2017, the duo were nominated at the BBC Radio 2 Folk Awards in the ’Horizon’ category for ‘Best Emerging Artist’. One of the highest accolades in their genre, it was made even more exceptional because it was only a few months prior to this that Jon Whitley and Jay LaBouchardiere relinquished their jobs as a teacher and GP in favour of a full-time music career. Since then, the duo have continued their upwards trajectory, graduating to more senior award categories, most recently picking up ‘Best Duo’ in the 2019 Folking.com awards.

Named after Nine Barrow Down in the Purbeck hills, their first release While the Blackthorn Burns was voted FATEA Magazine’s Best Debut Album of 2014, while their last album Releasing the Leaves (2016) saw a volley of critical acclaim including five-star reviews in Maverick and EDS Magazine as well as Best Duo nominations in the FATEA and Folking.com Awards.
Ninebarrow have continued this upwards trajectory with their new record, The Waters and the Wild. The 11-track album highlights how their inspired songwriting is ever evolving and displays the duo’s incredible vocal harmonies through original songs mixed with innovative arrangements of folk standards, all wrapped in lush, sensitive arrangements and flawless musicianship. The album has been described by folk luminary, Mike Harding, as ‘absolutely monumental’. In June 2018, the album also reached Number 2 in Amazon’s Folk Best-Seller chart and, at the end of last year, was crowned ‘Best Album of 2018’ by Nova FM.

It is the multi-award-winning duo’s modern and inventive take on the folk tradition that seems to be captivating audiences across the country. Not only exceptional singers and musicians, they are also equally passionate about the stories behind their songs. A live session on BBC Radio 2’s Folk Show, described by presenter Mark Radcliffe as ’immaculate’, has lead to a string of sell-out shows across the UK.

Engaging, charismatic and humorous – Ninebarrow are winning new fans wherever they go. See them live, and you’ll quickly understand why.