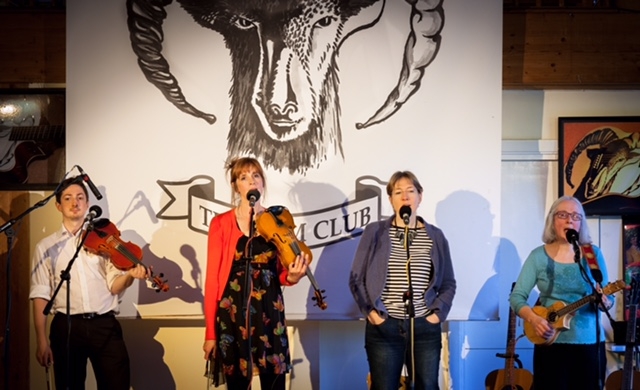 Suntrap are a 4 piece folk-inspired group with beautiful entrancing vocal harmonies on original and self-written material.

Suntrap’s Sara Byers, Mary Wilson and John Sandall have been joined by Sue Graves after the departure of Paul Hoad in 2014.

Sue, known as the ‘Surrey Nightingale’ is a stunning addition to Suntrap’s powerful vocal harmony sound.

Sara and Mary began singing together after meeting at Cecil Sharp House in 1996. The following year they made their first demo at Dave Pegg’s Woodwork Studios and Suntrap have gone on to make four highly regarded CDs, the most recent of these released on Fellside Recordings. They have played all over the UK and Europe at major folk festivals, folk clubs and art centres. The band have been privileged to open Cambridge and Warwick Folk Festivals.